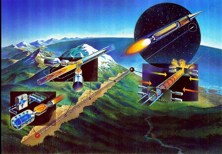 The elements of the campaign materials have been completed and been approved by the Kickstarter organization. These include a text description of Green Launch, a video, and rewards for different levels of contributions. The Green Launch team has commitments of $120,000 from team members, family, and friends towards Phase 1 of the program. We estimate that this is slightly more than half of the expense required to achieve the Phase 1 goal of a launch to the Karman Line of space. Therefore, we have set a Kickstarter campaign goal of $95,000. The campaign should start officially in mid-March. Please visit the website and make a contribution.

Yuma Proving Ground (YPG) Testing Contract
The U.S. Army has incorporated our Green Launch plan of activities for testing into a formal contract. Don Whitney signed the contract for Green Launch and returned it to the YPG Test Directorate for their signature. Expect final signatures in April.

YPG Testing Contract
Green Launch delivered our plan of activities for testing to the YPG Test Directorate. The contract for YPG services and range use is now in review with government contract staff. Expect final signatures early 2017.

Green Launch at Mars Society
John Hunter has been invited to give a plenary talk at the Mars Society annual convention at UC Irvine CA, September 7-10, 2017. Schedule permitting, we will try to be there.

Horizontal Test Preparation
John Hunter and Phil Sluder made another trip to YPG on March 30. The purpose was to make further detailed measurements of the 175 mm tube so that detailed drawings can be made. They also met with YPG personnel to discuss horizontal test locations on the range and plans for NDT testing of the tube.