Pneumatic Components Received
Phil Sluter of TriAxial Design and John Hunter refined and optimized the tubing and fittings to control the gas loading of the gun and safe firing. Firm order was placed on June 2 for the major components. Essentially all of the parts have now been received and assembly started on July 6. Photo shows Don Whitney, Ray Tinker, and John Hunter with one of the four main manifold panels. 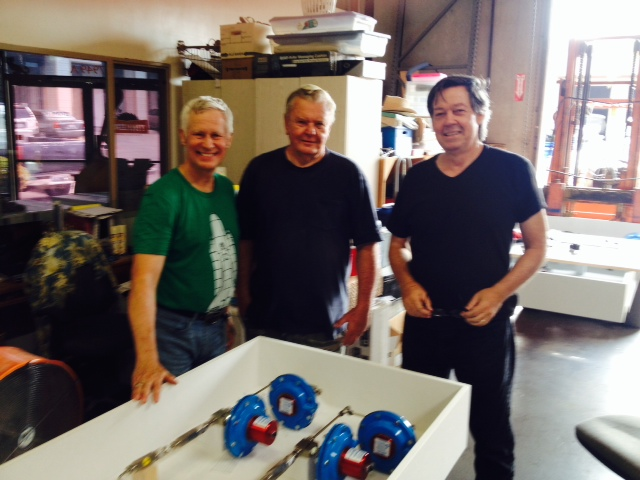 Preliminary Patent Applications Submitted
There are several aspects of the Green Launch system which we belief are novel and patentable. Therefore, John Hunter has written these up and submitted them to the US Patent Office for approval.

Green Launch on TV
Due to studio logistical problems, John Hunter and Eric Robinson did not get to complete the taping session for a national television show. However, we hope to have another opportunity this coming Fall to appear on the show and thereby publicize Green Launch and increase awareness of our activities.

Pneumatic Components Assembly
This work is under way in San Diego. A convenient location has been confirmed for assembly and testing of the pneumatic manifolds to deliver the various gases to the launch tube. Each manifold will consist of valves gauges and connections mounted on a panel to allow for easy transportability and assembly. We also plan a subscale testing of the gun components.