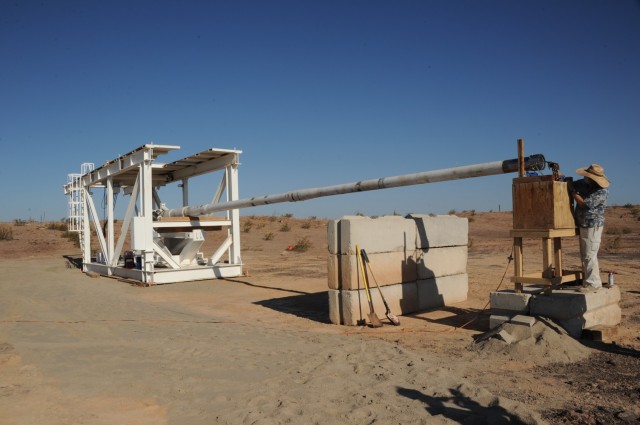 Unlike most military installations, U.S. Army Yuma Proving Ground’s (YPG) primary purpose is not to train troops for combat, but to test the equipment they use to ensure it works as it should.

With a unique mission, YPG’s funding model is also unique. Perhaps 30% of YPG’s funding comes from an allocation from the Department of the Army to cover overhead expenses.

“We have a different model than basically the rest of the Army where we depend on reimbursable work,” said Jeff Rogers, Air Combat Director. “When we’re given our budget, we’re not funded at 100%, so we have to get customers to supplement us.”

Most of this reimbursable work comes from other customers within the Department of Defense, but some comes from private industry customers. In recent years, companies from General Atomics to Facebook have conducted testing at the proving ground with the support of YPG personnel. These customers pay all costs associated with their respective testing.

“It keeps our skills sharp and current, because they can work with the customers and see the newest technologies coming down the pipeline,” said Rogers. “It’s good for the Army because a lot of the systems the Army uses are spawned out of private industry. It’s not that the Army has a big workforce that goes out and creates a whole bunch of new stuff: a lot of what is later used is adapted or adopted from private industry technologies to meet the Army’s needs.”

YPG is a Major Range Test and Facility Base (MRTFB), and The National Defense Authorization Act of 2003 makes facilities with this designation available to other users who have a valid need for them.

YPG does this by providing a public-facing list of capabilities located here, and attempting to send potential customers to private industry facilities that provide the same services or capabilities prior to agreeing to conduct a test.

Most of the airspace over the United States is unrestricted. To fly their craft in these conditions, unmanned aircraft developers must acquire a certificate of authorization (COA) from the Federal Aviation Administration (FAA). This is a lengthy and exhaustive process that can take months and is specific not only to the aircraft, but the specific configuration of the aircraft. Thus, if developers want to modify their aircraft in response to their testing, they must get a new COA after every change.

Achieving these stringent conditions is unrealistic for an untested unmanned aerial systems (UAS) in the early stages of development. Additionally, an important part of the developmental process is testing worst-case scenarios. It is unlikely that the FAA would allow such testing in the national airspace. YPG’s 2,000 square miles of restricted airspace, on the other hand, is above miles and miles of land far from any populated area.

There are other benefits to private industry customers conducting aviation testing as well. YPG’s unsurpassed capabilities allow for extensive testing without having to compete for runway and airspace with manned fighter jets as at other installations. Another critical bonus of testing at YPG is the presence of a wealth of other infrastructure meant for other sectors of YPG’s broad test mission that can be leveraged to support UAS evaluations.

YPG is home to things like technical and tactical targets, as well as generator and combined maintenance shops, all of which are useful for UAS testing. YPG’s spectrum management office can also ensures they have the frequencies they need for their specialized testing: YPG has nearly 600 permanent radio frequencies assigned to it, and uses more than 1,000 temporary ones in a given month.

“If we can squeeze them in, it’s great for them and great for us: we get to keep our folks employed and reap the benefit of getting that workload without impacting military test and maximize the air space and range time that we have,” said Silva. “Going to a training base or some other DoD installation can be hard to get into because of training and deployment schedules. As for us, we are an MRTFB and can work them into the schedule.”

Though aviation testing constitutes the bulk of YPG’s private industry work, there are also examples on the ground combat side of the house. The world record for the highest altitude artillery shot was set at YPG in 1966. The test fire more than 50 years ago proved the concept of ballistic suborbital space access, and the idea of using artillery as a low-cost alternative to rockets to launch payloads into Earth orbit lives on. In recent years, a private industry customer called Green Launch has conducted testing here to launch a projectile into space with an innovative hydrogen and oxygen gas propellant whose only byproduct is water vapor.

“YPG is very helpful at keeping our costs under control so we can continue our testing,” said Eric Robinson, Green Launch Business Development Director. “If we went somewhere else, we could never finish the sequence and the world would be denied this technology that is really very promising.”

Hosting commercial testing means the test center’s mobile snow-making machines and other specialized track grooming equipment not found elsewhere in the Department of Defense keeps moving, which saves maintenance costs in the long run. Further, continuous use means the skill the test center’s equipment operators have gained operating the esoteric machines doesn’t degrade: for instance, in unskilled hands a mobile track dryer could ruin the track’s asphalt while melting snow and ice.

“When we have low military workload, being able to do commercial testing allows us to maintain equipment capabilities and the expertise needed for doing those things,” said Jeff Lipscomb, CRTC’s Technical Director. “That way, whenever a military test comes, we’re not scrambling to figure out how to support it. To me, the biggest benefit of the commercial automotive workload is that it keeps us on the cutting edge of automotive testing.”