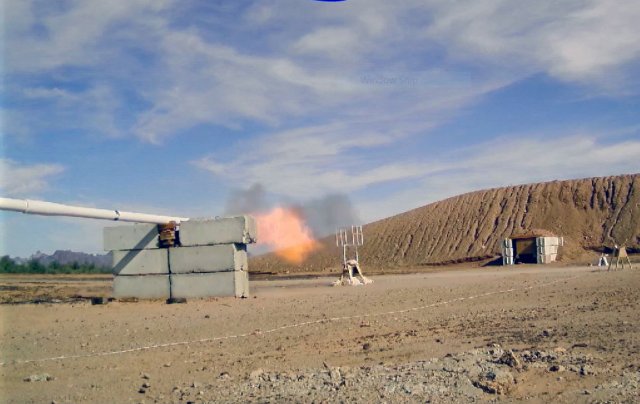 YUMA PROVING GROUND, Ariz.– From Jules Verne until the dawn of the rocket age, scientific thinkers and dreamers assumed that massive artillery fire was the logical means of accelerating payloads into the heavens.

Even in the 1960s, as NASA perfected the massive, multi-stage Saturn V rockets that propelled humanity to the moon–and U.S. Army Yuma Proving Ground (YPG) tested the Mobility Test Article, precursor to the lunar rover–the Army was conducting the High Altitude Research Project (HARP), which intended to utilize artillery fire as a lower cost alternative to launching scientific payloads into Earth orbit. The world record for the highest altitude shot–which reached past the Karman Line into space– was set at the proving ground in 1966. It proved the concept of ballistic suborbital space access, but funding for the program was cancelled the following year.

The original HARP cannon and several smaller gun tubes associated with those long-ago tests remain at YPG and are still viable for firing with a relatively small amount of refurbishment. Currently, a private industry customer called Green Launch is at YPG conducting early of launching a space projectile with some of this equipment, combined with an innovative new technology.

Using a hydrogen and oxygen gas propellant, the company feels that as humanity expands its presence in the Solar System in the coming decades, impulse-launched deliveries of supplies and materials will be critically important, particularly given the vast sums of money required for humanity’s first forays to places like Mars.

“It takes a million pounds of fuel per person to get to Mars and back,” said Eric Robinson, strategic outreach manager. “Multiplied by $5,000 per pound, that’s $5 billion just for fuel. Our system would be more like $200 per pound. Hydrogen and oxygen are cheap.”

Another advantage of artillery-fired delivery of objects would be the speed and frequency of fire: they could ascend faster and be repeated with less work than multi-stage rockets.

“Your items could be in orbit in five minutes,” said Robinson. “We could be launching every 60 to 90 minutes. This will enable us to be the FedEx of space.”

It would also be significantly more environmentally-friendly than burning rocket fuel.

“At the very end of a shot, a little bit of a steam cloud comes out, because hydrogen and oxygen make water,” said Robinson. “The eventual design may use a solar-heated steam piston and hydrogen that is 95% recaptured after each launch.”

The early phase of testing in progress now consists of horizontally firing a high density plastic slug through a velocity trap into a specially-constructed catch box in front of a thick earthen berm.

“The set-up is very similar to that of many other firing tests, but this is truly a developmental test,” said Chris Tennant, test officer. “A lot of tests at YPG are lot acceptance or stockpile reliability tests, or engineering tests where most of the components are known and one portion of a system is being changed.”

To prepare a launch, the testers insert a burst diaphragm, followed by an o ring behind the plastic slug. Finally, an ignition assembly with squibs the testers have dubbed the ‘Christmas tree’ is loaded. The testers have added feed tubes that push hydrogen and oxygen gas into the gun. Once enough gas pressure is built up behind the diaphragm, the testers ignite it from a bombproof control room panel and the projectile fires.

“We really haven’t modified the gun significantly, except for the breach section,” said Dr. John Hunter, chief technical officer. “It’s made for a solid propellant, which is why the available breach volume is fairly small. We prefer a much bigger breach, so when we do the vertical shots we’ll probably end up pushing the projectile about a third of the way in the barrel and use a specialized release mechanism that gives about three times the volume.”

At this stage, testers are primarily interested in measuring projectile velocity and ensuring the burst diagram performs in a controlled manner. So far, with horizontal fires, the testers have already achieved velocities similar to that of the HARP vertical shot that set the world record in 1966. They want to achieve even faster velocities before converting to vertical test fires of their system.

“The trick is using a light gas like hydrogen, which has a very low molecular weight,” said Hunter. “You can get very high velocities that aren’t possible with powder. This exceptional propellant will allow us to revolutionize access to space and open the solar system to exploration and resources.”

“Hydrogen is super-fast, and the ignition and energy from making water is a very energetic exothermic reaction,” added Robinson.

Green Launch is a start-up company that seeks rigorous cost control to ensure the long-term perpetuation of their ambitious program. Hunter, highly regarded in the projectile research community for many decades, was only marginally aware of YPG and its capabilities until a chance meeting with proving ground personnel.

“I went to a conference in New Mexico five or 10 years ago and ran into some high speed photographers who told me the best test range is YPG,” said Hunter.

“YPG is very helpful at keeping our costs under control so we can continue our testing,” added Robinson. “If we went somewhere else, we could never finish the sequence and the world would be denied this very promising technology.”

For their part, YPG personnel are excited about their role in supporting what could turn out to be a project of monumental importance.

“If they can get the muzzle velocity they want, they intend to eventually shoot vertically,” said Tennant. “I’m hoping we can make it happen here and break the world altitude record that was set at YPG back in 1966.”